In collaboration with Hypercube JSC

RU
EN
mHealth programs are held to help society manage the chronic disease all over the world for over a decade
The US and Australian researchers have done a few tests to confirm the effect of SMS-reminders for diabetes 1st line prevention. The research resulted in increasing the level of diabetes prevention and management awareness and rising in the consumers' loyalty.
According to the World Health Organisation, the number of people with diabetes has nearly quadrupled, rising from 108 million in 1980 to 422 million in 2014, with Type 2 accounting for 90% of all cases. Its prevalence and burden of disease have been rising worldwide, mainly due to obesity and lack of physical activity.

It is currently the eighth leading cause of death in the world and it is expected to become the seventh by 2030. In 2012, it was the direct cause of 1.5 million deaths.

According to official figures, there are 4.3 million of people with diagnosed type 2 diabetes in Russia. Experts assume that the real number of potential patients is more than 8 million of people. Moreover, it is known that 20% of Russians live in a pre-diabetes health condition.
Cigna is expanding its Diabetes Prevention Program in collaboration with Omada Health, offering an expanded suite of personalised, user-friendly digital health tools to help people prevent the onset of diabetes and other chronic diseases. In 2017, Omada Health raises $50M for digital health coaching program and expands partnership with Cigna.
Our goal is to reduce the diabetes cases emergence via preventing SMS-intervention in mutual partnership with healthcare institutions and insurance companies
What are your benefits?

Reducing the number of insurance claims and progressive diseases

Strengthening the image of a caring clinic or insurance company

Increase revenue along with customer loyalty
How does the text reminder look like?
The content is aligned to the internal health institution policy and with the expert doctor.

The messages are sent only with the consent of the clinic.

The text contains the warning that the prevention is not a diagnosis.

The reminders are non-intrusive and sent 2 times a week in a daytime. 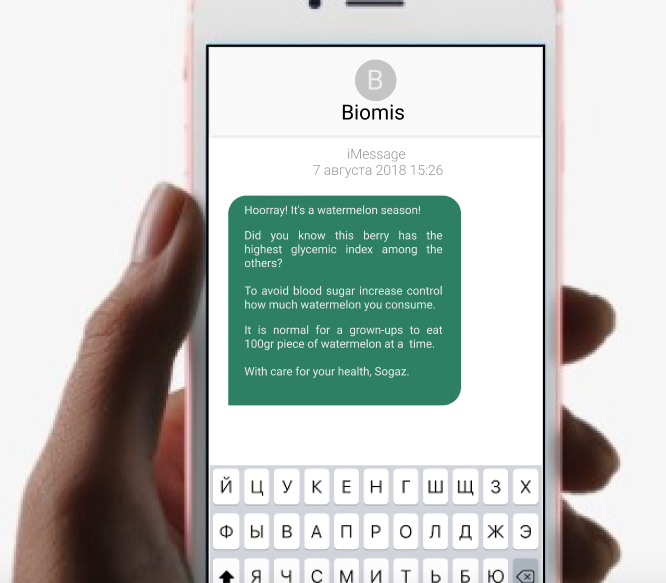